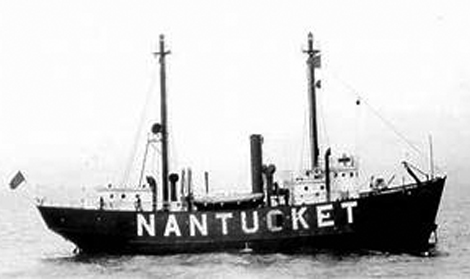 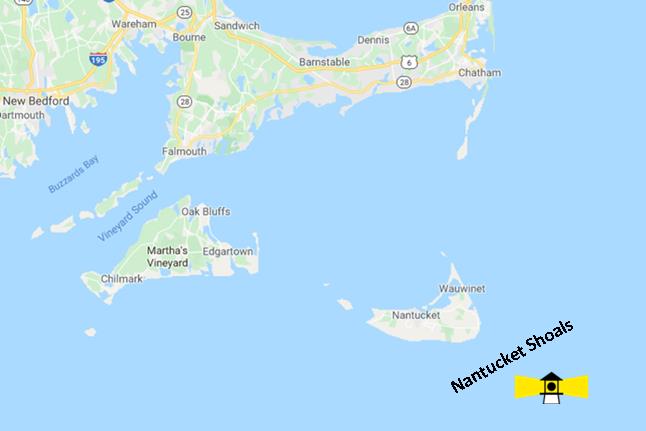 Nantucket Shoals is an area of dangerously shallow water extending southeast from Nantucket Island, Massachusetts.  The shoals are just off a major transatlantic shipping lane and in some locations the water can be as shallow as 3 feet.  Lightships stationed there were the last light seen by vessels leaving the U.S. and the first one seen when approaching.  Between 1854 and 1983 a number of different vessels marked the edge of these dangerous shoals including the Nantucket LV-117, which began its duty there in 1930.

Lightship duty has been described as long periods of boredom followed by short periods of sheer terror.  In addition to the dangers posed by extreme weather and high seas, ships would home in on the lightship’s radio signal at night to help guide them toward the lightship’s position.  However, they were expected to post lookouts and turn in time to avoid any collisions.  Unfortunately, on May 15, 1934 the fog was so thick that an approaching passenger ship, the British White Star Line SS Olympic (sister to the Titanic) failed to see the lightship. Warning devices aboard LV-117 included electric lens lanterns on each of its two mastheads, an electric diaphragm horn and a 1,200 pound fog warning bell.  In spite of all of these devices and with only 500 feet of visibility, by the time the lightship was seen or heard, it was too late to make a course correction.  The crash was inevitable and the Olympic rammed and sunk LV-117.  Four men went down with the ship and seven survivors were picked up by the Olympic, three of whom later died of their injuries. When it was determined that there were no more survivors, Olympic resumed its course for New York having suffered only minimal damage in the collision.  The Cundard-White Star Line subsequently replaced the lost ship by paying for the construction of its replacement, LV-112.

In 1970, LV-117 was discovered in 200 feet of water, but its identity was not confirmed until 1998.  It was reported to be lying on its port side and well preserved despite reports that it had been cut in half by Olympic.  The ship’s bell was eventually recovered and the lives of those lost are memorialized on the National Lightship Sailors Memorial.  Located in New Bedford, Massachusetts, it also displays the bell from the Vineyard Lightship, which disappeared during the Great Atlantic Hurricane of 1944.  The memorial was featured on the USLHS 2019 Christmas ornament and a collector’s stamp is now available from the New Bedford Visitors Center.

References and for more information about LV-117:

Order by clicking Here or visit our store

The set of stamps will be shipped to you via 1st class U.S. Mail.